Hoppa till innehåll
THE DEAD DAISIES
How come you picked Burn It Down as the new album title?
Well one of the songs on the record is called Burn It Down.
You know it’s weird with every new record it’s kinda like a new beginning.
Burn It Down is lyrically about new beginnings.
Sometimes when you’re on a path and you wanna better yourself and you gotta back up and start over. Each record is starting over. So lyrically it’s about starting over but it’s also about people who complain about their lives and never do anything about it.
We were looking at the titles we had and could easily picked Rise Up but for some reason everybody dug and liked the vibe of Burn It Down so we went with that.
What song on the album means the most to you?
I would probably say Resurrected.
Only because the music business can be very unforgiving.
I guess when I was writing the lyrics I was thinking about how I got the Mötley Crue gig and then Vince Neil coming back and then just watching how everybody was treating me when I was in Mötley and how they treated me when I was out of Mötley. And still to this day there are fans that love me to death while some fans are just brutal and mean spirited. So I was thinking about myself but I was also thinking about Deen Castronovo and all the things that he went through in the last couple of years. He would be the first to admit that he didn’t think he would ever be given a second chance. So it’s kinda about second chances and maybe in some way it’s a kinda polite way for me so say Fuck You I ain’t going anywhere.
Deen is just a great guy and got a little sidetracked. He’s a great dude and even the Journey guys he still talks to them almost every day. They get it but they had to do what they did so he could get repaired. So Deen and Journey are still good friends. 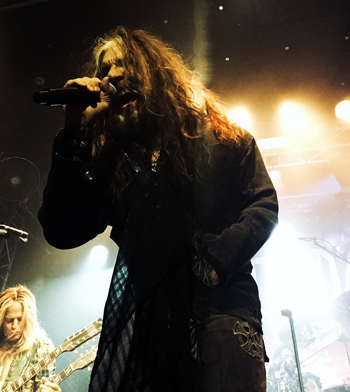 How does the writing process work in The Dead Daisies?
Usually our manager say were going to do a record and were going to start here.
We say ok and all come together with our phones. And we all start playing riffs and ideas.
And somehow we just manage to take a riff and make a song and then right into the studio and lay it down. We sit down with Marti Fredrickson our producer and like with Burn It Down we had like 25 ideas and he said in my opion these 12 are like that’s the songs and let’s build on these.
I’ve known Marti since I did The Scream record but hadn’t worked with him before the last two records. But now it’s very cool that we have another writer and a producer in the room with us.
He’s to The Dead Daisies kinda like Bob Ezrin was to Alice Cooper,Jack Douglas was to Aerosmith or Sir George Martin was to The Beatles. He’s a writer, producer, arranger and he hears things in the songs. We have every intension to work with Marti for a very long time.
Marti is coming over to Europe later this year with Steven Tyler as his guitarplayer on his solo tour so check that out if you can.
Does it get harder or easier to pick the setlist with every album?
It’s getting harder. We switch the set around and change something almost every show.
The fans wanna certain songs so it’s starting to get difficult.
I sometimes sit and think about Aerosmith and how the hell they pick a setlist with all those fantastic songs. One song from each record and they can’t even do that without missing so many great songs in the setlist. I mean pick just one song from Toys In The Attic or Rocks. That’s just impossible.
Since the members in the band have been in so many big bands over the years.
Have there been any talks to include songs from members past instead of other covers?
No. Marco,Doug,Deen has a solo careers and when I say solo I mean something outside The Dead Daisies and I have the John Corabi Band. So if anybody wants to hear those songs come and see these other bands. If we do one of my songs then we have to do one of Marco’s,one of Deen’s ,one of David’s and one of Doug’s you know what I mean. That would be 5 songs in the setlist so we keep it separate.
Is there any city or country that you feel that the band have really won?
It’s been growing everywhere. We just did 6-7 shows in the UK and everyone was sold out and for every time we go there the venue has change for a bigger one. This year it was a place that took like 2000 people. The first time we went to Holland I think we sold like 200 tickets and this time we sold like 900 tickets. So we are seeing it grow everywhere. All the shows in Japan are already sold out.
All of us are blown away by the growth of The Dead Daises fans all over the world.
In Scandinavia we’ve done some festivals and we opened for Whitesnake here a few years ago.
So it’s growing slowly here as well.

UNION
On June 9th 2000 you played at Sticky Fingers with Union.
Anything in the future for the band? Live or release plans?
We’ve talked. We didn’t really split up. Everybody just got bigger gigs.
Union were doing well in Scandinavia only. In America nobody cared.
Some places in Europe were ok and others not so good.
And then Bruce Kulick got offered the Grand Funk Railroad gig, I got Ratt gig and Brent and Jamie ended up in Vince Neil’s solo band.
But we have talked about when all the four of us are off at the same time it would be cool to rehearse and do like a month of shows just for the fun of doing it.
When Richard Fortus left The Dead Daisies in 2016 was Bruce Kulick asked or thought of as a replacement?
I thought of it but knew it wouldn’t work because I knew Bruce was so busy with Grand Funk Railroad and Kiss convention things. And they had already talked to Doug and I’ve known him since he was 16 years old since were both from Philadelphia. Same with Deen. I also suggested Brent Fitz,Jimmy D &  Jimmy D’Anda but again scheduling wise it was Deen that had the time to do the gig.
RATT
Was there anything recorded while you were in the band?
No.Nothing got recorded.
MÖTLEY CRUE
We were trying to come up with a different band name and it was the business people like Elektra Records who just had given Mötley like 40-50 million dollars and they just said you can’t change the name you’re Mötley “fucking” Crue. Nobody is going to know you’re new band. The booking agents who booked the shows were like as Mötley Crue you are making this a night and if you go out “Dog Balls” you’re making this a night….So they talked us out of it.
I have no regrets about that record.It is what it is. I had a great time doing it. A great time touring with those guys. I’m still doing my thing and a lot of it has to do with that record. So they say life is as it should be
Are there any unreleased songs from your years in the band?
Yes a bunch. But it’s like this with any “corporation” you’re with and you’re losing your job you have to turn all the material in. So all the things that didn’t get released or even finished I had to return to the band when I left. I have some tapes that I go back and listen to every now and then. And there are some riffs that might end up on a solo record and if I do I will give credit to Tommy,Nikki and Mick on it.
What’s your favorite song from the Mötley Crue album?
if I had to pick one I would honestly say Misunderstood.
It’s got a little bit of everything on it. It’s very Zeppelin at times,It’s very Beatles at times.
Great orchestration and great guitars. Big drumfills.
And Glenn Hughes on backing vocals.
I love Glenn. I remember seeing him without having any idea of who he was with Deep Purple on California Jam on tv in 1974. It was just insane. What a singer. And he’s a good dude too. 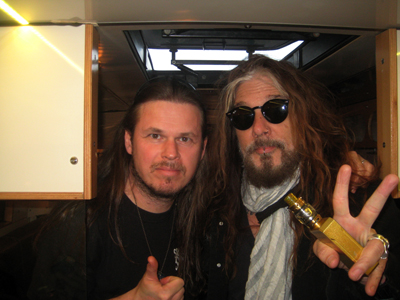 SOLO ALBUM
I did the acoustic album a few years ago and earlier this year I released the Mötley Live 1994 album.
As soon as I have some time off I’m working on a solo album with Marti Fredrickson.
I have some ideas and hopefully I have it done and out sometime next year.
Andy Flash
Sticky Fingers, Gothenburg 2018-04-20